So yesterday I woke up and after getting some coffee I checked my email and among a long list of junkmail I found a cry for help from a fellow gamer. It was Dr. The Viking, from Dr. The Viking's Miniature Games Hell, asking if I had the evening free to playtest some Pulp Alley with him.

Apparently he is going to Sweden next weekend to showcase some retro sci-fi/space cowboy stuff and so we had to test of if everything would work out and if he had all he needed.

I snapped a few photos of the game and even though everything was not painted I decided to post it anyway.

The set-up included some Skeleton Robot Cowboys shooting it out against Mixed Posse of Space Teddy Bears, ZZ Top Scrunts and other Heroes! Both sides race to the center of the settlement to get access to the Astro Bank and the sweet plot point inside. 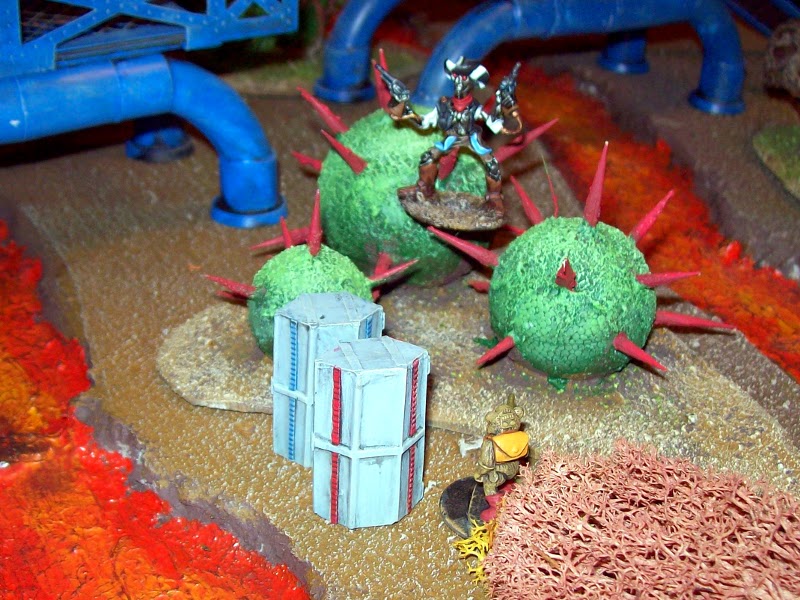 Pistol Pete gets knocked back by Speedy the Space Teddy.
Fighting over a minor plot point. 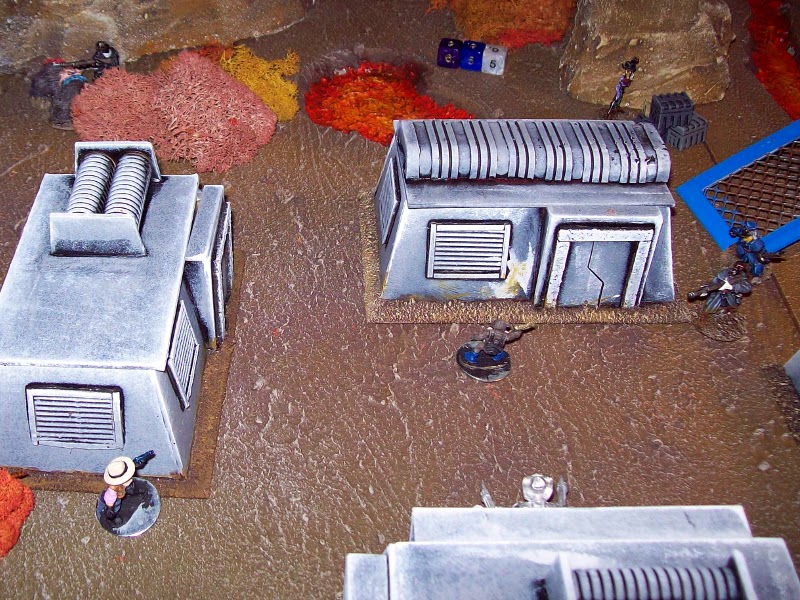 Dueling it out across the main square of Galactic Gulch City. 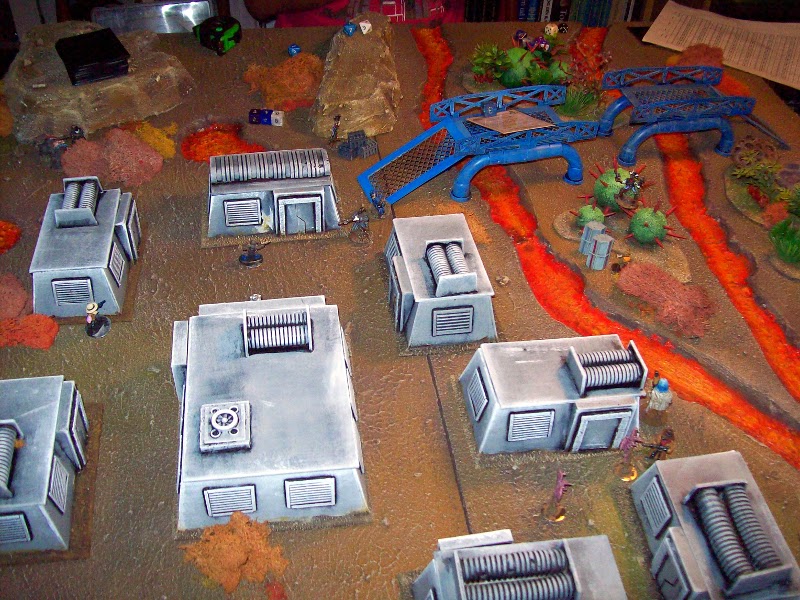 A quick overview of the set-up. 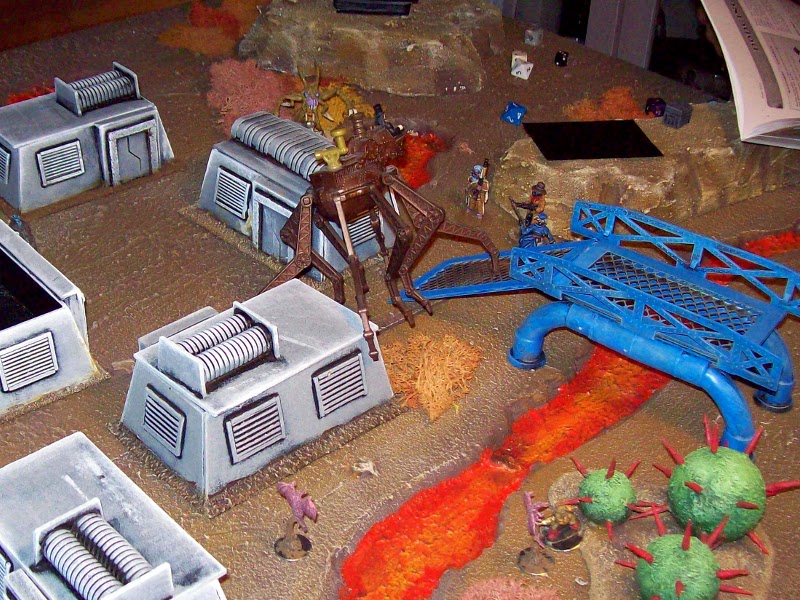 The bank vault is breached and the Mad Banker emerges to take vengeance. 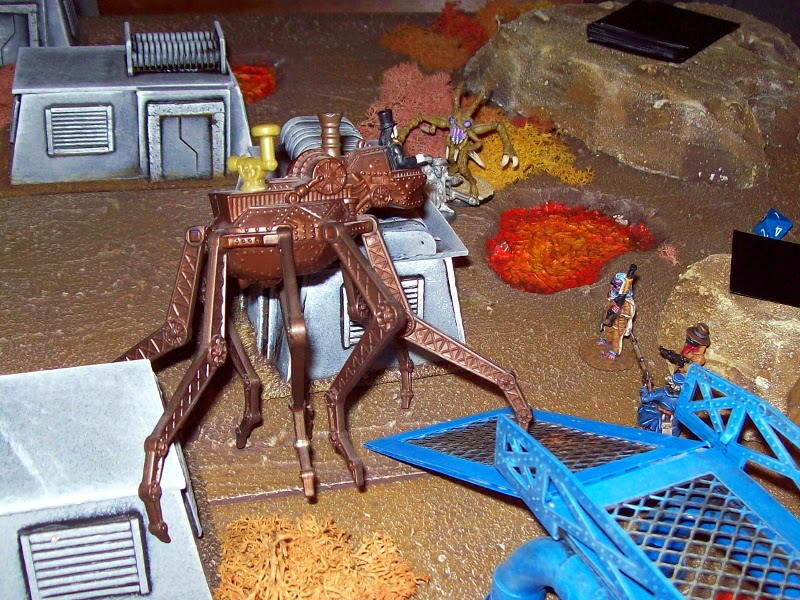 Too late, the Mad Banker is too late to save his loot.

The game was great fun and had some great plot twist during the game. We had 4 minor plot points and the bank vault was a major plot point worth double points.

Each time a plot point was taken a random encounter was also revealed in the shape of different Space Monsters and when the major plot point (the bank vault) was taken we decided that a kind of Boss was needed and the Wild Wild West mechanical spider was just perfect. it was something I had lying around in my lead (plastic) pile and as such it was not painted or coverted up for the task, but I hope Dr. The Viking will give it a good treatment before the actual game.

During the game the Skeleton Robot Cowboys was constantly in the lead, having the most plot points and always one step ahead. But by tactically saving my fortune cards for use in the right moments I managed to win the game in the very last turn.

By playing a fortune card I managed to prolong the game an extra turn, thus taking down the robot leader in turn 7. Then taking over the major plot point right away by playing a second fortune card as the Robot leader was knocked down.

The game was now taken over by the Mixed Posse, but with a huge Infiltrator Bug threatening my leader it was still possible for me to lose the 2 plot points he held and the Robots was threatening my Side Kick, who was holding my 3rd point. So it was possible to make this a draw just before curtain fall.

Luckily I had saved just the right fortune card for this situation and when the final Robot Cowboy tried to take down my Side Kick I revealed my fortune card and got myself a free dodge out of the way. At that point the Robots could no longer win or make it a draw.

A short update of more miniatures for Super Hero gaming. These are Axis Gorillas for Dust Tactics, but I probably won't be playing Dust anytime soon and bought these for my gang of Nazi Super Villains. 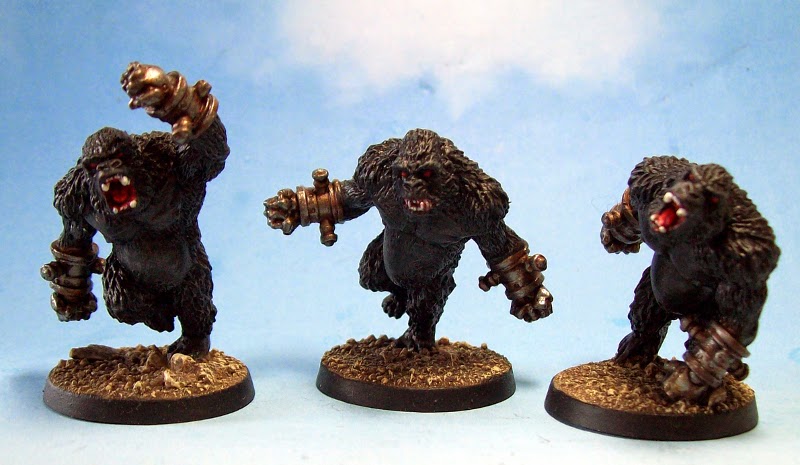 
I think I originally bought them to use with Weird WWII games, but I think they have more chance to get used for Super System or other Super Hero gaming.

Besides the quick paintjob I also rebased them, since I don't like the Dust bases very much. I put some washers underneath the bases, to give them some weight and stop them from tipping over.