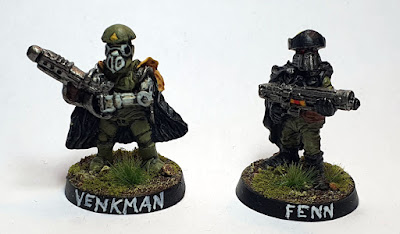 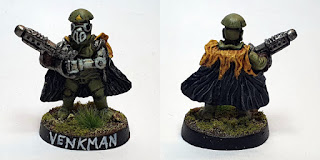 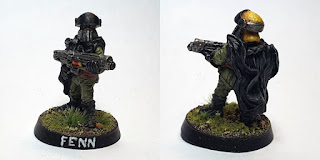 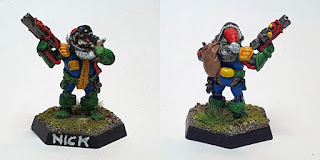 Starting a new year and hopefully this year will bring a bit more gaming....

As usual I don't post nearly as much as I would like to, but I actually get some painting done. Some projects I will deffinately return to this year is my WFB3 Dwarf Army, Fantasy Skirmish, Rogue Trader and I will do a post (eventually) about my Space Fleet game, which finally got painted last year, after I bought it back in 1990.

First off is the beginning of my Rogue Trader crew. Lead by Magos Biologis Erythron Mon S'Lant and hopefully his adventures will turn into a running campaign.

What they are up to I don't know yet, but hopefully something good. I actually think I got a briefing earlier, but updates must come as the campaign goes on.

Erythron is a low life Magos Biologis going around his buisness, collecting samples, stealing artifacts, touring the universe, as you do when you are on the run. 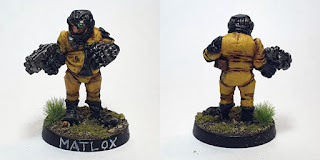 Matlox is straight, no drinking or combat drugs, but instead his brain has been connected to a computer chip that stimulates agression and shooting abilities. 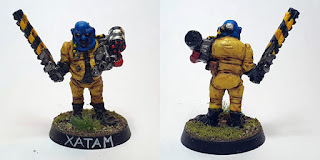 Xatan on the other hand has taken so many combat drugs that his skin turned blue and he is now so addicted that he can hardly enjoy killing without it.

G.O. used to work for A&L Corporation, but decided he was better off making his luck on his own or in this case, with Erythron. 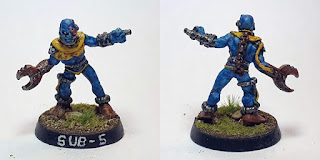 Subject-5; Part animated corpse, part machine. Your could say he is some kind of servitor, but this guy was deffinately not made by Imperial standards.