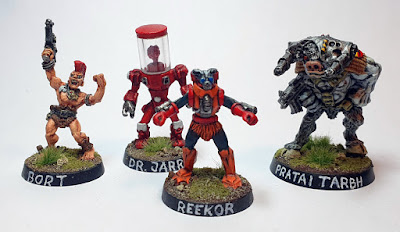 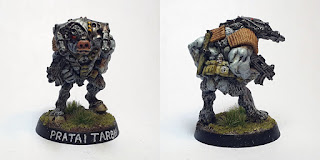 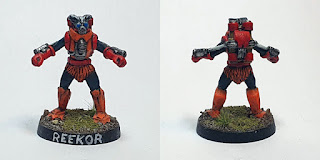 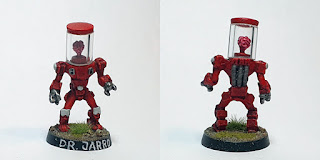 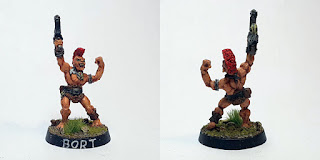 This time I have a mix of some old and some new. I repainted an Ork Weirdboy and I slightly updated a couple of Four A Miniatures (I believe another company bought the rights to these, I thought it was Macrocosm, but could not find them on their page). Also there is a dog.

The Four A guys are painted in mostly blue and white colours, which is the universal colours of police types, so they are a couple of rogue space police/enforcers, travelling around with their dog and apparently arresting Ork Weirdboys.

"Hands up you scum!" 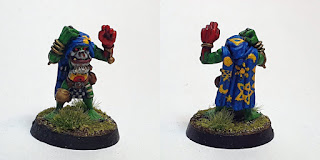 The Weirdboy doesn't have a name like the other guys, he is going to be part of my Ork forces, for now they are still a nameless bunch of raiders.

I was searching for this Weirdboy for quite some time and when I finally got it I painted it right away. It was already painted and I decided to paint on top of the existing paintjob as a guide/inspiration when I made his colours fit my Ork gang. 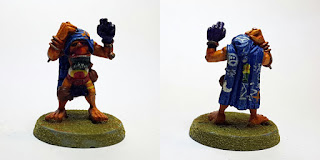 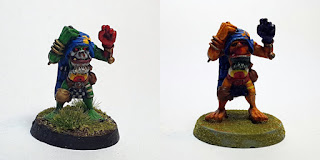 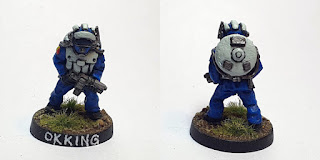 Once a cop, always a cop. He used to be a big shot crime investigator on Earth, but his drinking problems got him discharged with disgrace. Now he is a low life copper hunting down trouble in the far reaches of the known Universe. 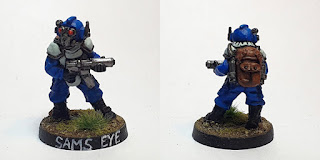 Sams Eye is not really called Sams Eye, but everybody has been calling him that since he was stationed on the far away outpost moon Sams Eye. Now he is just known as the Copper from Sams Eye. 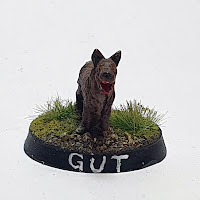 Gut is a good dog. Friendly and happy. Sometimes he eats out the guts of outlaws too.