Ever since I saw these lovely (but odd) Dwarf miniatures, from Heartbreaker Hobbies, I wanted to use them with my other Oldhammer Dwarfs. They didn't quite fit in with their rather strange style, but still I couldn't help myself buying a bunch of them. The ones I have is actually a mix of the Heartbreaker Dark Dwarfs and their "normal" Dwarfs, but I decided to do them all as Dark Dwarfs since their style is more similar to each other, than to the rest of my Dwarfs. 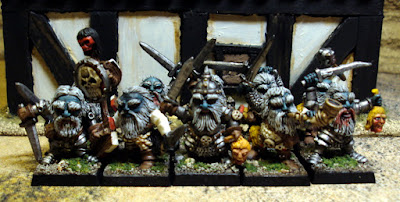 First I was going to paint them as D&D Duargar, but trying out a lot of different paint schemes I could not really find one I liked. In the end i came up with the combo of bluish skin and white hair and I think it generally works.

Their attire is mainly armour, but on their clothed parts I decided to stick with my army's main colour scheme of red and white. Again this works out fine for most minis, but I am not 100% satisfied with everything.

Fluff-wise these will be allied Dark Dwarfs from the Under Mountain, but AoS game-wise they will be played as Dwarf Warriors with hand weapons and shields.

Some backside details og shields and such.

Building on the background story for my Dwarf Army the main portion of my Dwarfs left the mountains and moved to the hills outside the main human settlements, acquiring the lifestyle and habits of the humans. This works well with the Marauder and White Knight renaissance style minis and of course some of my older Dwarfs are just grumpy and still do it the old ways.

Then we have these Dark Dwarfs now. In my background story for them I decided that these are the Dwarfs that stayed behind in the mountains. Apparently something happened there which drove their regular kin to move and the same event has driven these guys to dig deeper and now live deep beneath the mountain.

The Dark Dwarfs have become twisted in mind and appearance, but when a war is fought on the ground they still come to help their distant relatives. Not only because they are related, but also because they just love the bloodshed and mayhem.
Posted by Jonas kl. 19:40 2 comments: