On my hunt to get some more Rogue Trader critters and creatures I decided that I wanted som Cudbears. It is something I have been thinking of for some time, but I never really decided what models I wanted to use. There is plenty of bear miniatures out there, but not really any that 100% matched the picture in the Rogue Trader book. 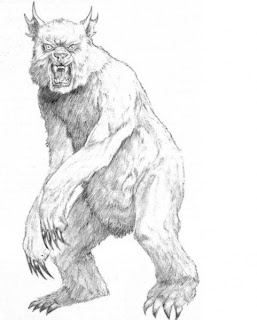 Picture from the Rogue Trader book.


The description of the creature is not much different than an ordinary bear and I believe the idea back then was to use any available bear miniature and paint it purple (or cudbear). The guys who made this up was probably smoking some funny tobaco.

"The Cudbear is a native of the Death World of Cthelle. Aside from its long claws, teeth and shaggy purple hair the Cudbear looks much like a traditional bear. Its thick fur is particular adapt at protecting the creature from the cold and wet environment of the planets temperate forest and mountain regions. A natural predator the Cudbear is extremely dangerous and territorial. It has been known to attack large groups of individuals, even heavily armed individuals, who may wander near its home.

Authorities on Cthelle have reported a few known incidents of the creature climbing aboard out going spacecraft in search of food and massacring the crew." (Quote taken from the Rogue Trader book )

So a few weeks ago, when I was putting in an order at Wargames Foundry I decided to order a pack of "Great Big Bellicose Bear" and painted up I think they make pretty good Cudbears, but judge for yourself. 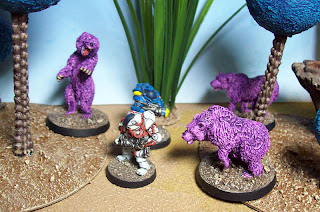 Lined up with the original GW power armoured trooper.

The bears are the usual high Foundry standard and took paint pretty easy. Now these monsters are ready to ambush any rogue trader or death world adventurer who foolishly enough enters their domain. 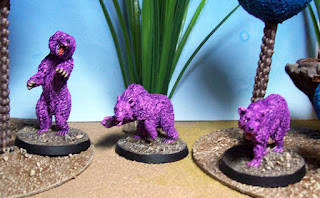