I guess it is time for another last minute update....
This time I don't really have anything new for my list. I have been painting a lot of random stuff and not much Epic. But I did paint a bit Epic and I also still have some undocumented stuff.
Today I took pictures of my Land Raider Company. I also took some pics of old minis, to document how my old armies looked, before I eventually repaint. And last but not least I took some pics of my Warhound Titans.
As it turned out all the pictures where quite bad. But I worked a bit with it and in the end I chose to just post about the Warhounds. 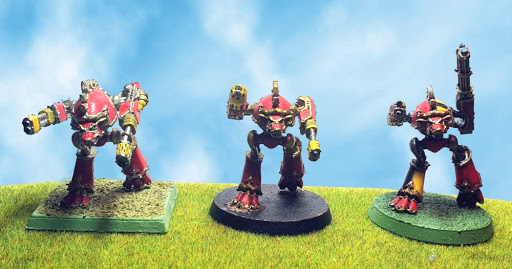 Painted around 1992/93 - 2010 - 2020
Back in the days Warhounds came together two at a time. I managed to get four and paint three back then. In 2010 I stripped one of the old ones and repainted (as seen above) and now I painted the 4th one.
I have decided to keep the two from the 90s as they are. I kind of like them even though they are far from my current standard. (Even if you can't see it on my terrible pics). 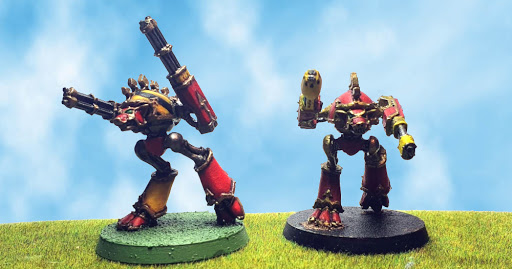 New Hounds.
I am going to update the paintjob on the 2010 Warhound and do the base with sand and goblin green. I know they don't come in pairs anymore, but I still need at least two ready for battle. 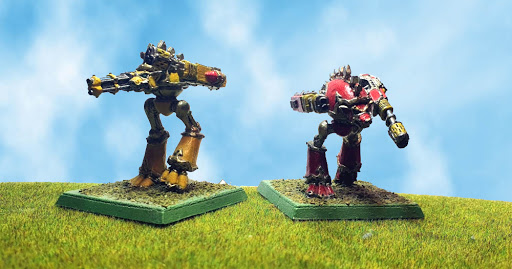 Old Hounds.
The old Warhounds didn't follow any Titan Legion scheme at all. I painted one red and one yellow, the third one I later stripped had a squared red/yellow theme. My old Warlords was blue for no reason.
Now I want to do some Iron Skull type Titans, but they will be in the service of my Blood Angels so far.
I really wish I had two more Warhounds as I would like to paint some Legio Astraman. I am currently painting Astraman for new A.T. and it would be fun to try the paint scheme on the old models.
Posted by Jonas kl. 22:22 2 comments:

Working a bit on this and that, so I played around with some of the finished employees of the Commodore Droid Store gang. These are mostly just workers, encounters and non combatants. 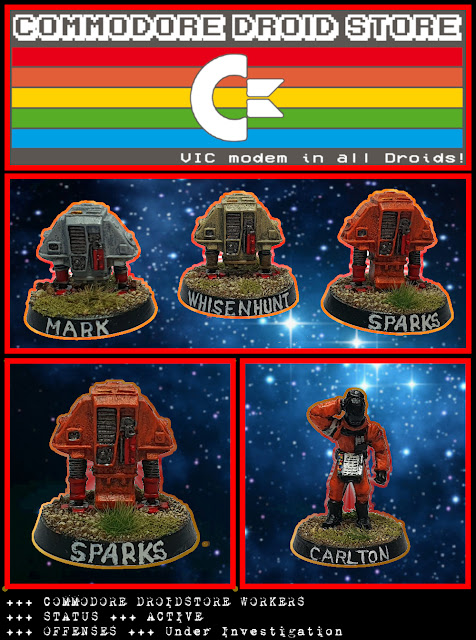 Droids are from Ainsty Castings Spy-Fi line and the operator is an old Acropolis Designs/Zap Miniatures model, now sold by The Baggage Train.