I think it comes as no surprise, if I tell you, that we are a couple of folks who really like the Warhammer 40K universe and the models (at least the old ones).On the other hand the rules doesn't really do it for us at all. I won't get into details about all the things we don't like about modern 40K gaming, but the main problems are the huge amount of models needed, the general tournament oriented attitude and competetive approach towards gaming.

We have previously tried out Rogue Trader by playing Battle at the Farm, the scenario included in the original rulebook. Things didn't really work out that well. The system is great in the ways that it is narative, very open and free, but the rules are heavy and kind of hard getting into. So before going back to Rogue Trader gaming we decided to try and play some games using Nuclear Renaissance from Ramshackle Games.

Since one of my usual gaming buddies, Thorbjørn, just painted up some Rogue Trader Orks (See more at Dr. The Viking's Miniature Games Hell) it was obvious that we should do a classic Marines vs. Orks game.

After re-reading the rules we worked out some profiles for the Marines, Orks, Gretchin and their weapons and then we plunged right into the game!

"A mysterious space craft has suddenly appeared by a small Imperial research facility in the wastes. Investigation has shown that the space craft was hostile and a small band of Ork pirates have taken over the settlement.
As the station is in posession of some very important research results a nearby scouting squad of World Eater marines is sent to recover the documents and anything else important. They are accompanied by a scientist who has been working on the secret project."

The Orky menace at the captured research facility. 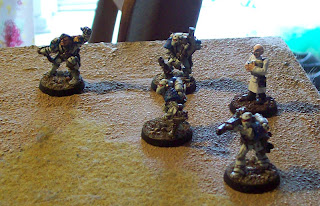 The scientist accompanied by a squad of World Eater marines. 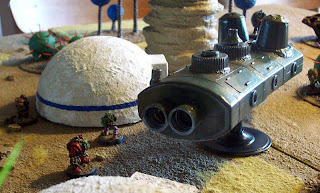 The Orks are allerted and move into positions for taking on the marines. 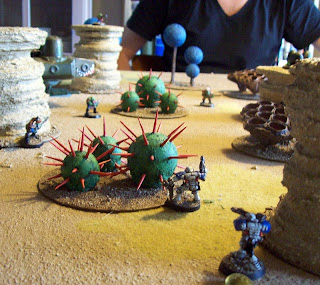 Marines slowly advancing towards the shuttle. 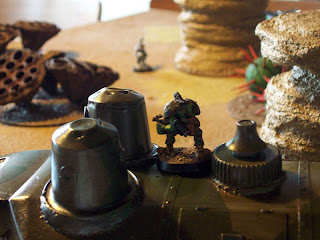 An ork sentry shoots the marine commander with a lucky bolter shot. 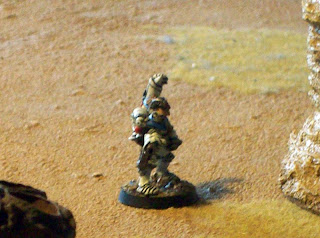 The marines loses his armor and at that point we decided to end the game.

Well, that was ceartainly something else. The game was a test to see if the rules would work out for Rogue Trader gaming and in conclusion we decided that the rules worked out fine. But we still had some troubles with the game. We had already chosen to ignore the part of the rules about how to build up your gangs, so when we when we chose the profiles and equipment of the characters we just chose whatever sounded like it was fitting for marines and orks and this didn't really work out. We made up power armor and bolters by mixing different weapon and armor profiles and upgrades and in the end I think some of those things was just too powerfull.

We have not given up on trying out Nuclear Renaissance for Rogue Trader gaming, but we do need to work on the profiles of the equipment and such.

The problems we did encounter was mainly my fault, since I was in charge of reading the rules and making the chracters, and generally I have no idea if rules and things work out before I have tried out a game or two. But I think this first game has given me a pretty good insight in what things we need to change and I am sure that next time we give it a go it will already be much better.

Doing a project like 40K in another set of rules is always going to be a matter of balancing fluff against what will make a fun game and in the end I hope we will be able to make ourself a Nuclear Renaissance list tweaked for our likings and list of profiles for standard marines, orks, eldar and the classic weapons like bolters, chainswords, shuriken catapults and so on.

I am always looking for critters and creatures which can be used as random encounters, wasteland dwellers, exotic pets and so forth. So when I started gaming Post Apocalypse some of the first thing I painted was a couple of pet lizards, for one of my gangs. Since then I have added some more to the lot and I decided to paint the new ones and re-paint the old ones, so they would look up to date.

At dusk the cold-blooded creatures come out to hunt. 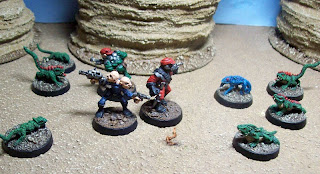 Nothing is too big a prey, when you have a poisonous bite.

The lizards are a mix of old Warhammer Fantasy lizard swarms of some sort. I doubt they are very rare or hard to find, but I think they make a good addition to my growing collection of wildlife. 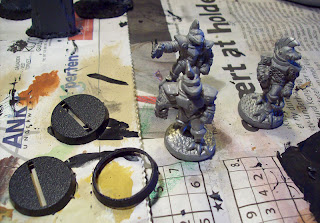 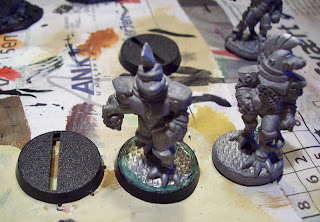 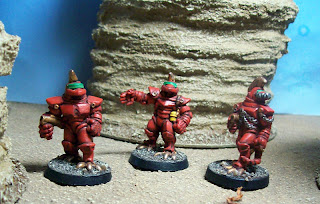 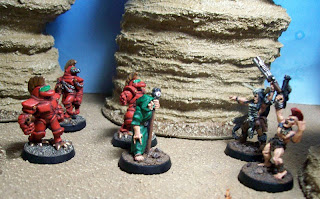