Back in the days, when I started my venture into alternative gaming and my gaming group and I played a lot of post apocalypse style games, we had quite a loose setting where almost everything could (and would) happen. I really think we had a lot of great games and an interesting storyline going on, but eventually things died and we moved onto other genres.

The main problem used to be the rules. Whatever we tried out there always seemed to be something not quite right. But still we had a lot of fun and I always thought it was a shame we never did more in the genre.

It all probably just comes down to finding some rules that basically works out and tweak it to our own gaming needs. So recently I have been reading up on the Nuclear Renaissance rules from Ramshackle Games again and we decided to give it another go.

For this games I set up a Phagon cloning station in the city of Dos Angeles. The cloning station has been working illegally for some time, but the local law enforcement, represented by Inquisitor Gar and his corrupt posse of Marines and Squats, was not satisfied with the amount of bribes and decides to show and example by destroying some cloning tanks in the outskirts of the city. 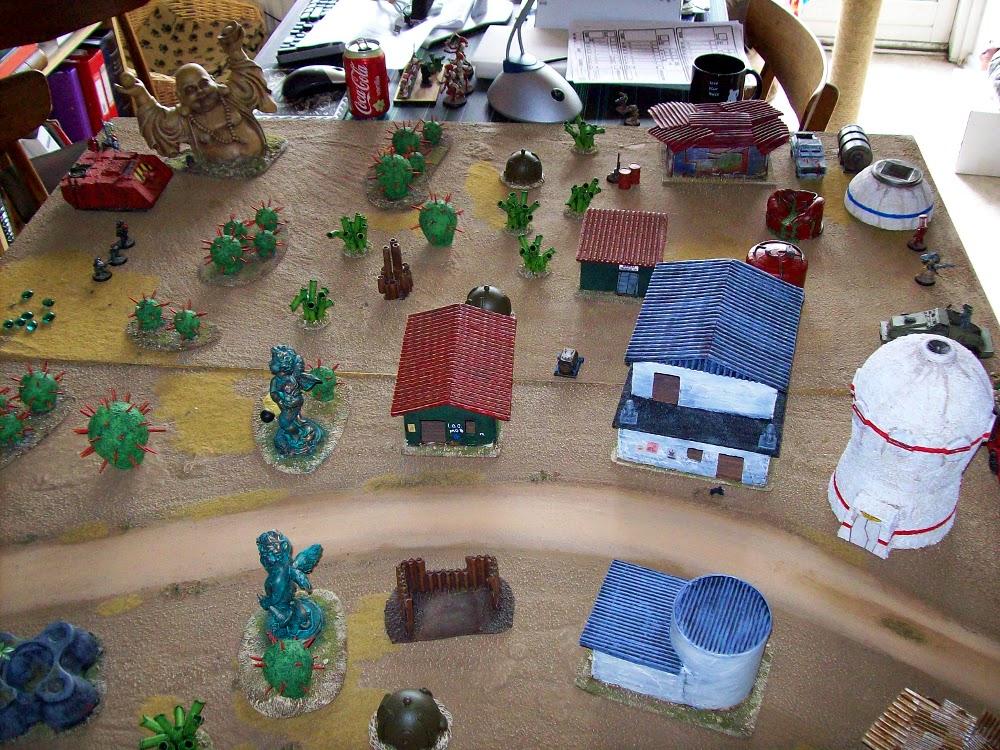 Inquisitor Gar arrives in a massive Iron Grumbler making a lot of noise and making sure everyone hears him make his entry. 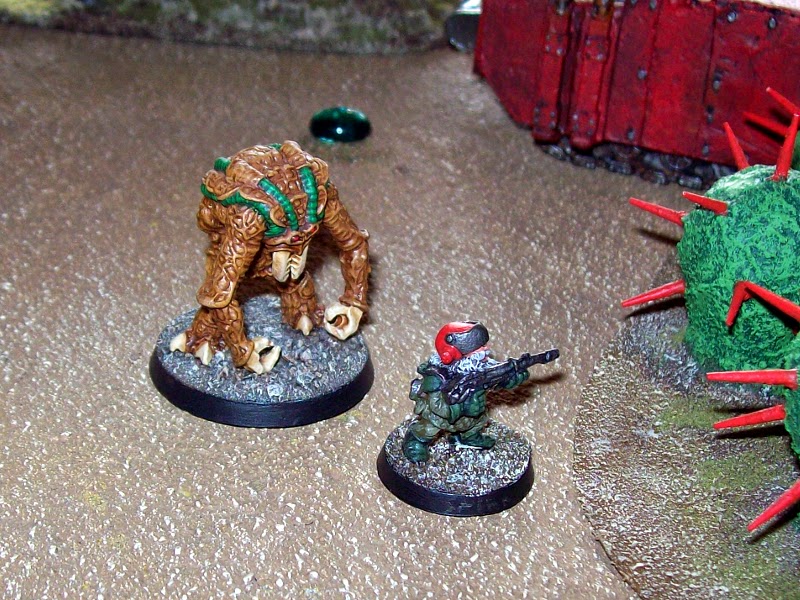 An Ambull quickly pops out of the ground disturbed by the noise. 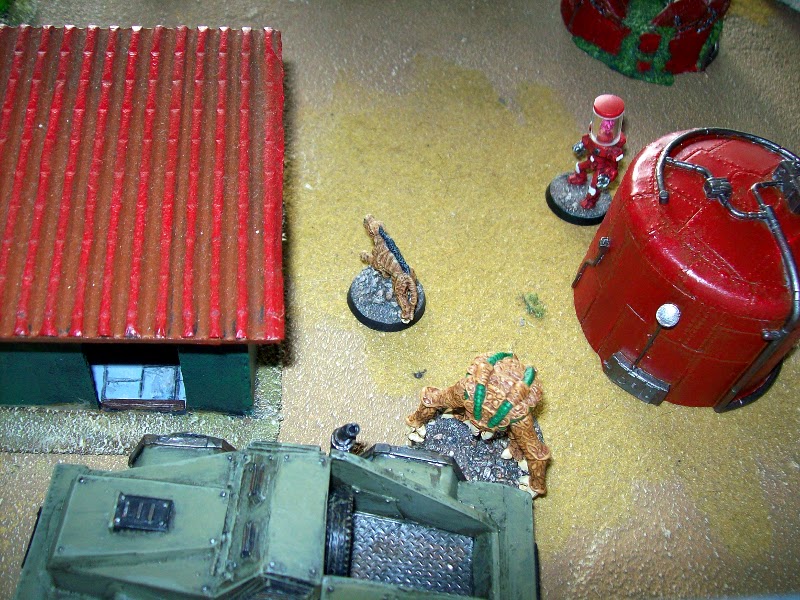 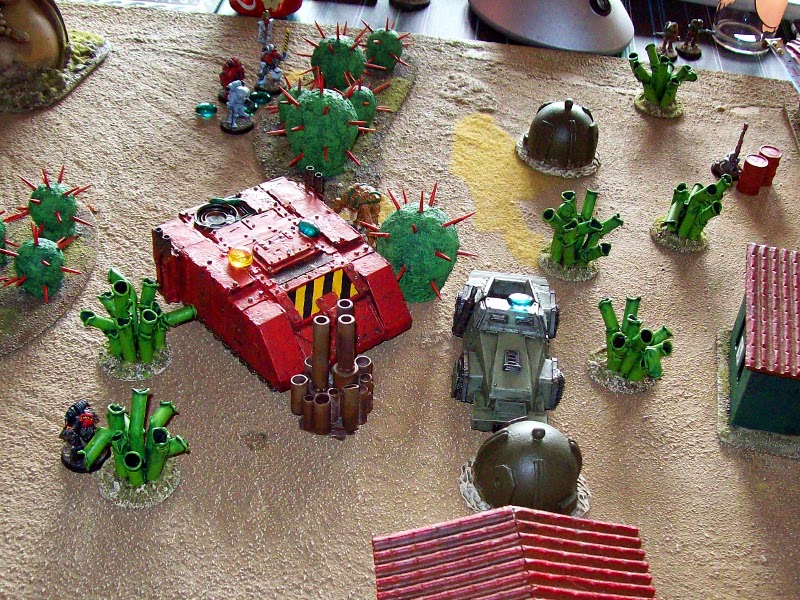 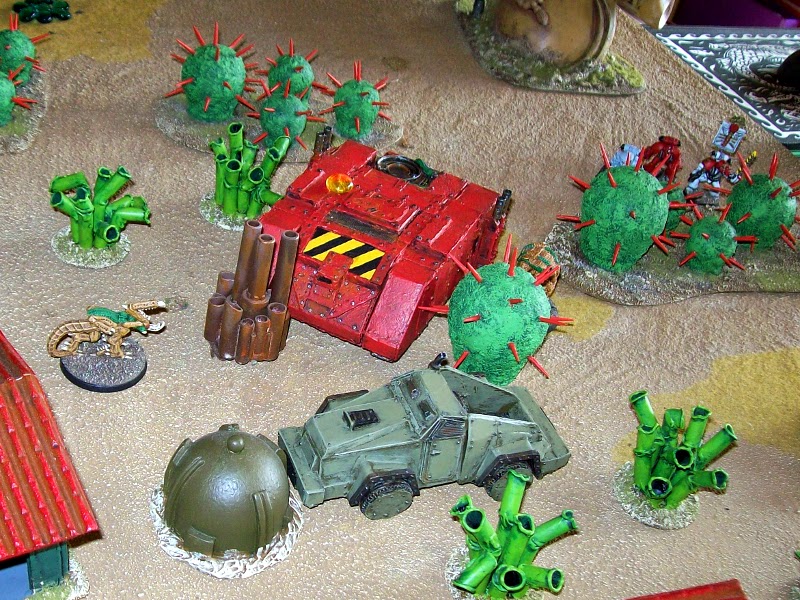 An abominable Running Ripper chages towards the Iron Grumbler. 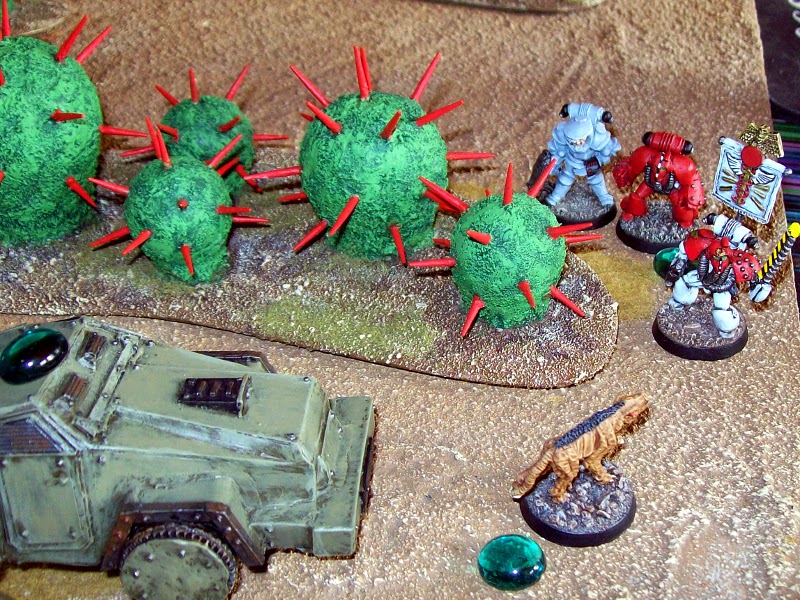 And a PSI Wolf try to fend of the Inquisitor. 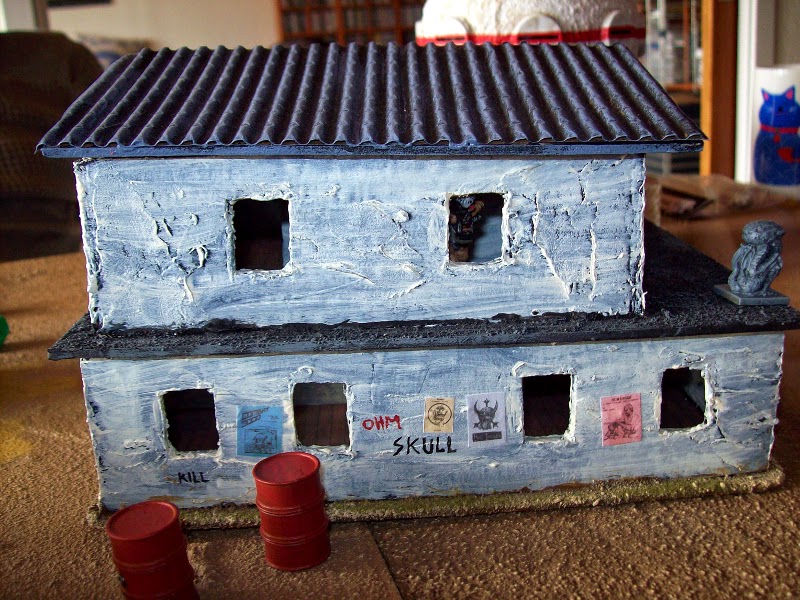 The Piscean Warrior hide in a building. 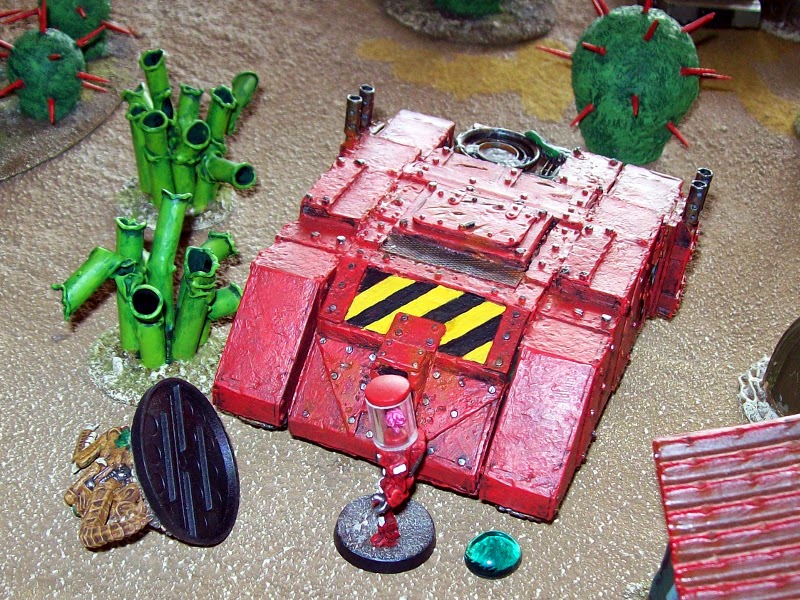 The Running Ripper was gunned down and as Dr. Brain runs to the aid of his beloved pet he gets run down by the Iron Grumbler.

Meanwhile the Piscean Warrior has been gunning down the Inquisitorial Medic and Inquisitor Gar himself, but the last Marine decides to still blow up some cloning tanks. 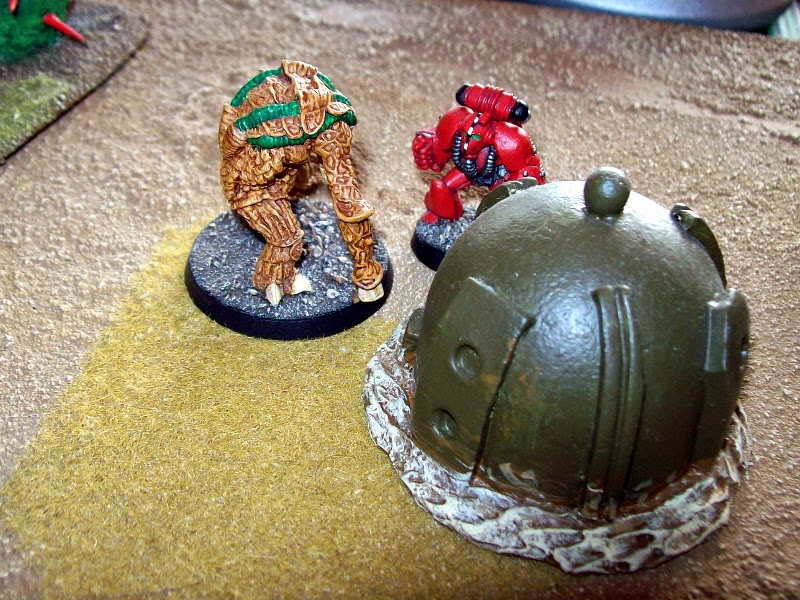 This Ambull was beaten to the ground by twin powerfists! 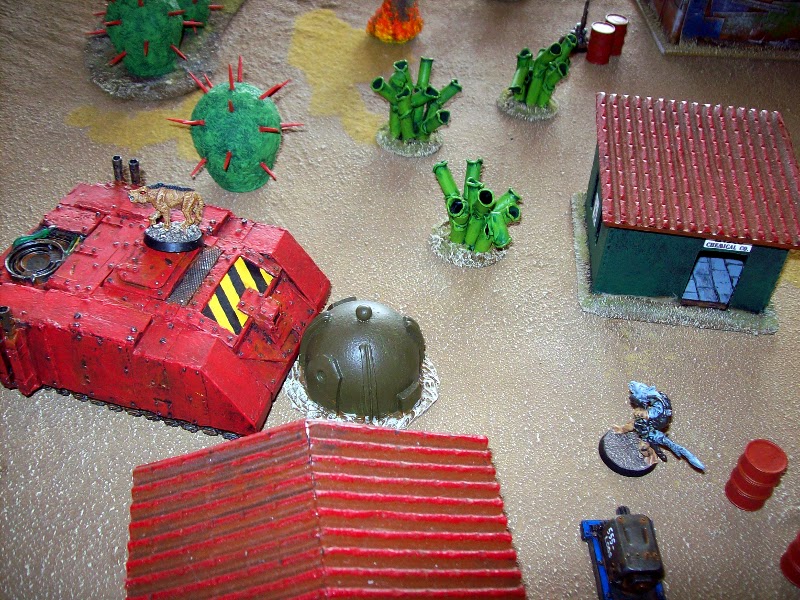 In the end only a few models was left on the table and only the Iron Grumbler was left on the Inquisitorial side. Trying to run ram another cloning tank but failing in the attempt. Unfortunately Inquitor Gar and his men had forgotten to close the hatch when they left the tank and a PSI Wolf jumped on the tank, into it and ate the driver.

In conclusion the game was quite fun and the rules worked out ok. We made a few mistakes along the way and I am sure things will be even better in future games of Nuclear Renaissance. 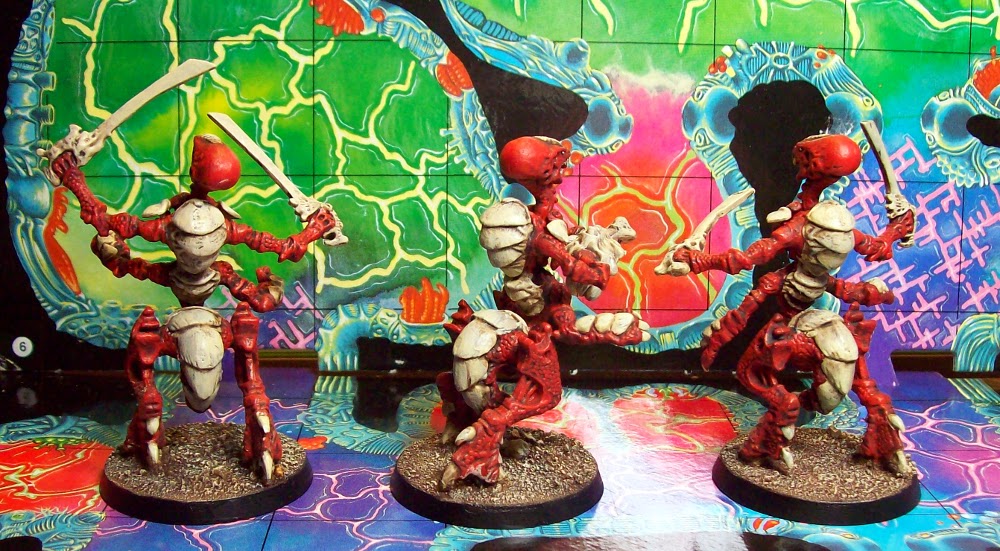