I guess I forgot to post in February about my Genestealer Cult progress, but then again my February entry was a little boring, so here you can have two months in one.
For the third month I finished the second Brood Brother Squad, armed with laspistols and various hand weapons, they are led by a Genestealer Hybrid Neophyte. I also painted the Patriarch, but as I was about to start the Patriarch I noticed he had some damages which would take me longer than planned to repair, so instead I took my old (already painted) Patriarch and gave him some touch up and did some more work on the base. This was not what I intended since I wanted to paint a second Patriarch in green instead of blue, but that one goes back in the pile for later. The most important here is to actually end up with a playable army. 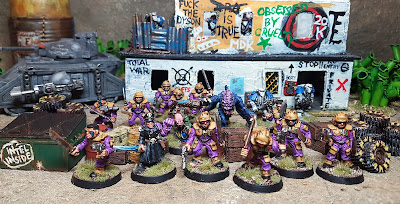 Full scale occupation
As bonus I finished a Commissar, which have no entry in the codex, so he will probably just ”count as” Brood Brother or be part of campaign plots and such. I also painted a Brood Brother with a Plasma Gun and made a bit touch up to some World Eater Marines for Allies.
Last month I did the Genestealers, the backbone of the Cult. Some ended up great, others not so much. So as usual... 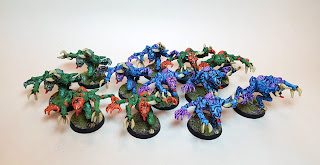 Genestealers
So to get on track with the backstory here: Tef Dupont had managed to proclaim himself Governor to the Eastern Autonomy of Khardishian Prime, naturally the non infected part of the population was nor really satisfied by this and preassure was rising in the regional Capitol; New Dos Angeles (Former Twin Angels). To ensure the not so loyal Citizens of his good intentions Tef Dupont sent for Imperial intervention to ensure the population, this turned out to come in the form of a Commissar, more troops of the Khardashian 8th Company and even a small number of Space Marines of the World Eaters Chapter. If anyone had voiced their discontent before no one said a word now, at least not in public… To be continued…
Posted by Jonas kl. 12:43 No comments:

So I kind of forgot to mention here that I entered the 3rd installment of the 40K 2nd Edition Army Challenge. This time around my brushes will be painting a Genestealer Chaos Cult.
For this month I finished the first Brood Brother Squad, armed with lasguns and led by a Genestealer Hybrid Acolyte and for a HQ model I painted a Cult Icon Bearer. As a bonus I also painted a Cobalt-1 miniature for a corrupt local despot.
The Brood Brothers will act as cannon fodder to protect the important Purestrains and Hybrids when the upheaval Begins. 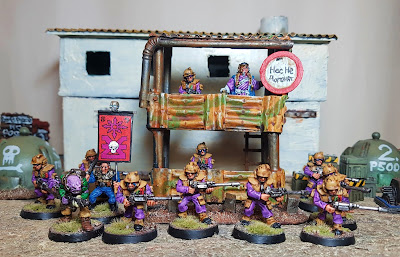 It is only buisness.
The story so far: Tef Dupont has managed to proclaim himself Governor to the Eastern Autonomy of Khardishian Prime, by some strange ways of manipulation, bribes and brute force. Along the way he procured the backing of the Khardashian 8th Company. Governor Dupont has set up base in Twin Angels and the Khardashian 8th Company is slowly digging in around the city.
As usual there is a lot more fun 'n games at the source: Oldschool c0wabunga
Posted by Jonas kl. 19:24 5 comments:

According to official Ork lore every month is Orktober...

Nob 'Umin Gut'Nasha and his Death Skull Boyz.
Like all my other 40K and Rogue Trader stuff it is something I paint on and off from time to time. So with all that crazy 40K 2nd edition going on I found out that I have enough Orks to field a small 1-2000pts army. I devided them up in Mobs and it seems to work out.
First finished unit is some Death Skull Boyz. I always liked the blue face look, but not so much the raggedy look of the patched together clothes and gear. So my Death Skull Mob has the blue faces, but chose to wear a rather uniform look of military style green and brown colours. 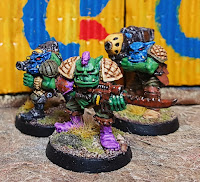 Ork Minder.
This is a random Ork I painted during summer. He only has one ear and is wearing purple outfit, he is clearly crazy, so I have decided to make him a minder for my Wierd Boy. Eventually he will get a banner.

The nasty lads.
Power Armour Nob will join a unit of Evil Sunz Nobs and Thrugg has been degraded to a simple Ork Minder after he joined the Ork Big Mob. Maybe that will change in the future....
Posted by Jonas kl. 16:52 2 comments:

Well blimey, I almost forgot to post my finished Squat Army from the challenge. Of course it is not really finished, but the challenge is over and I managed to paint the models I set out to paint and more.
At the end of the challenge I was a bit run out of energy and it was a bit of a stretch to get finished. Instead of my original planned bonus round entry I had to substitute with the Ogryns (which is OK too, since I already planned to add those to my forces, but it was not what I had wanted to do). 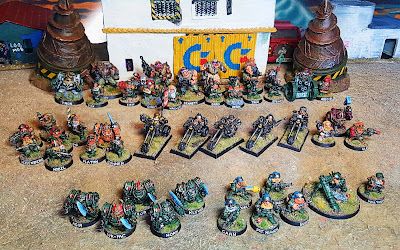 The combined Squat forces of Tauron Mining Company.
I am pretty pleased with the army so far and I look forward to trying it out in some games. My future plans for this is to do some touch ups here and there, change some bits and bops, muscle in the rest of my unpainted Squat models and maybe add a small Imperial Guard allied force at some point. 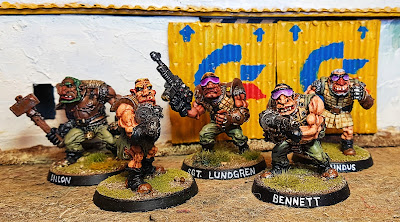 Ogryns ready to deal out punishment.
I also have a couple of more Ogryns lined up, they are such great fun models to paint and if I am lucky they might also work out on the battle field.
Also to round up I did talk about doing a reworking of a 2nd Edition Squat Codex and I hope to eventually proceed with that. My plans are to generally base it on the Black Codex Army List from the starter set, some from Rogue Trader, some from other fanmade lists. To focus on existing models mostly, so probably not huge changes, but I can again mention the Thermite Drill of course, it will need work and playtesting, I want to make it a bit like drop pod, but it needs to have ram value and I have been speculating on the entry rules, but let's see what happens. Other things will be like the possibility to equip troops with bolters, since a lot of the old model have those.
Anyway, enough ramblings, check out the other finalists at Dr. The Viking's c0wabunga
And I am already prepping a Genestealer Cult for the 3rd installment of the challenge.
Posted by Jonas kl. 14:15 3 comments: