I realise, that it has been some time since my last update. It is not because I haven't painted anything new or done anything miniature related, but I have been really busy lately. Playing live with my band, visiting Belgium with some of my family, sorting out general chaos and all such stuff.

But when I made this blog I decided that I would try and make at least one update each month. So I dug through my recent photos and found some stuff to share with you guys. 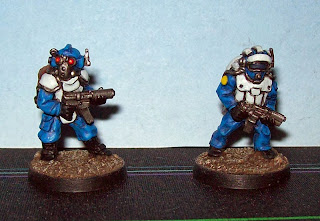 Mercenaries from Four A Miniatures which I recently painted.


These guys had been lying around for some time and I did'nt really know what to do with them. I ended up painting them in blue and white, so in the end I think they are now looking like some space police of some sorts. I like the models very much and I plan to get more stuff from Four A Miniatures in the future.


I was so lucky to get the pair of the Rogue Trader Fishmen from Wargames Foundry. They have only been available as a giveaway when they ran some Rogue Trader game weekends. They were a joy to paint and I think they turned out ok.

The Rogue Trader guy was just some dude I painted to try and paint some old school yellow. I am not 100% satisfied, but I think he has an ok rough and dirty look and will do fine as a space pirate or other scum.

The Matakishi Cat is from Matakishi's Tea House. What can I say? I just love that cat and Matakishi has been a good inspiration for a lot of my previous projects. I can recommend anyone to visit his homepage.

Besides that I have been working on a mixture of different project. I am constantly stripping old and second-hand miniatures, removing mold lines, greenstuffing, basing, base-coating and generally preparing miniatures, but there is not much fun in documenting that. But one bigger project, I have been doing for some time now, is my ongoing Spacelords Phagon army. I am not going to use it for Spacelords, since the rules are only in German, but I love to collect and paint the miniatures and we have been talking about trying out No Limits from Wargames Unlimited.

Here is some WIP army shots. 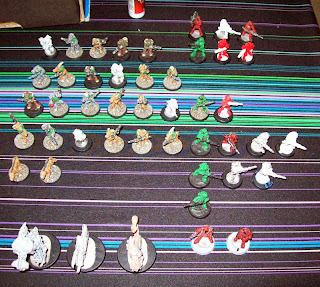 Army shot, a bit out of date though.


So far I have all the Beastmen, Battle-Beasts and the PSI-Wolves. I am still looking for some of the Battleclones and I think I am missing one or two of the Walkers.

Below is some old pictures of some of the finished models.

Hopefully I will soon have some updated pictures of my Phagon army and maybe some battle reports to go with them. At least I am pretty sure this project will continue, since I really like the Metal Magic miniatures.

If you got the hots for the Phagons, they are now available at EM4 Miniatures. Unfortunately all the Spacelords miniatures haven't been re-released yet and it has been some time since last new re-release, but we are still some who hope to see the complete line brought back at some point.