Doom of the Eldar

I have some good news. When Dr. The Viking, over at Dr. The Viking's Miniature Games Hell, heard my camera had broken down, he quickly came to my aid and gifted to me an old camera he had lying around. So it seems I am back in business!

What I need now is a bit more energy in my life or some more quit time, so I can doccument some of my projects. Also I might be straying a bit from the previous focus of my blog, since I am currently more interested in Victorian Sci-Fi/Darkest Africa and don't get much old school sci-fi and fantasy done.

For now my new camera has mostly been put to use for selling stuff on Facebook and Ebay. I am in the process of downsizing my collection and streamlining it all a bit more. I need the space and I need the money. But don't worry, I will keep most of my stuff and will hopefully have enough to blog about for many years to come. 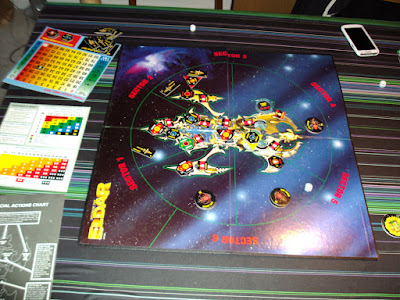 When I was in the process of sorting out my stuff I came across the old GW boardgames (Battle for Armageddon, Horus Heresy and Doom of the Eldar), something I have had lying around for years and not really put to use since I was a kid. I have fond memories about gaming Battle for Armageddon and Horus Heresy, but Doom of the Eldar didn't bring back many memories of anything. I mostly remember it being too complicated and kind of boring, so I decided that it would probably be sold off.

Before selling though, I decided to give it a last go and see what it was like. It actually turned out to be a pretty good little game with both tactical options and luck of the dice. I played a single game with the wife and we both had good fun trying it out and in the end I decided to keep this one a bit more. I guess time will tell how much play time it will get.