Apparently I have been dragged into gaming Warhammer Fantasy 3rd Edition. I never really played any Fantasy games very much and even though my gaming life started out with roleplaying games, which was mostly Fantasy or Cthulhu adventures, my miniature hobby has mostly been based around various Sci-Fi and Post Apocalypse gaming (I did play Warmachine for some time, but I don't consider that pure Fantasy).

But as people who have been following my blog knows I have been working on a Dwarf army, on and off, for many years. First I tried painting it for 4th Edition Warhammer, then Dragon Rampant, then it had a brief but hectic tour around Age of Sigmar and now I guess I ended up where I really wanted to go in the beginning anyway; Warhammer Fantasy 3rd Edition.

So far I have only played a single game and to be honest I thought it was a bit of a mess. But I have far from given up on the rules or the army and I plan to fully dedicate myself to paint and game 3rd Edition Warhammer for a long time to come.

I am doing this project with my gaming buddy Dr., from Dr. The Viking's Miniature Games Hell and he is building and painting an Undead Army.

You can read the rules of the "game" here and I will just do a quick summery.

We take turns in posting a painted unit, ending up with each a painted army, no deadlines or stress, but we still plan to get it finished in around a year or so. The army lists will be posted in each blog post with the finished units maked in bold and the unfinished in normal lettering.

My army so far is a bit of a mess, some units painted a bit, some not at all, but I have tried to base the list off of the models I currently own and I might edit it a bit along the way, but to start out this will be what I aim to do:

This army list is 2498pts and as such almost 500pts above the planned 2000pts, but like Dr. The Vikings army it will give me some space to pick different units from time to time.

To finish off I have a quick and ugly army shot, it includes some models that will not be in the army right away, but this is what I worked from when doing my list. 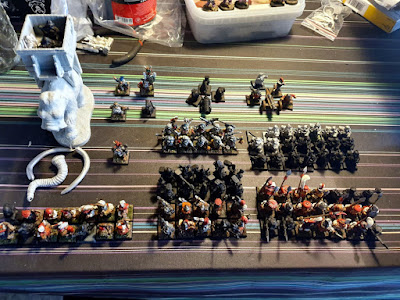