Deep Ones (From the Deep)

Ever since I discovered H.P. Lovecraft I have always been facinated by the universe of the Cthulhu Mythos. I learned about Lovecraft through role playing games and one of the first games I really got into was "Call of Cthulhu", so it was no wonder that I eventually would get myself some Cthulhu monsters after getting into miniature gaming.

I remember as a child, when my dad and I went to town, we always had some regular shops to visit. A couple of record stores, some second hand book stores and then we had to visit Comix. Comix was an awesome place for me, the stuff of dreams, they had comic books, role playing games and most importantly they had miniatures! Lots of them! I had no idea what games all those wonderful minaitures were for, so to begin with I just picked a few that I liked and could efford.

One of the things I always had to see in the shop was their glas cabinet where they showcased painted miniatures. They all looked so great and much better than anything I had painted myself and the crown jewel in their collection was (in my eyes) their painted version of the RAFM Great Cthulhu!

Since those days I have gradually picked up a whole bunch of Cthulhu monsters, and related miniatures. But I haven't really been painting any of them since they did not really come in handy for any of the games I played. At some point I even bought that old Great Cthulhu model, but it still lies unassembled and unpainted in my cabinet.

But the other day I decided to get some paint on some of the old miniatures, and some of the stuff I had lying around was this "USX Modern Day Heroes" starter set. It includes 12 Deep Ones and 5 SWAT team members. It doesn't seem like the game is supported anymore, but I found some old scenarios on the RAFM forum and thought I could give it a try, and if it doesn't work out for me I do have a completely different approach to gaming these days, so I should have no problem about putting these Deep Ones to use with other rules and games. 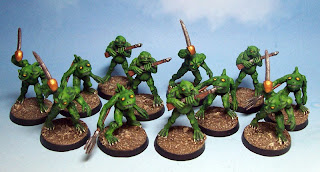 I chose a rather fast and simple paint scheme, but I think they ended up looking good enough for me to be happy about it . Also, I must admit, that even though I spend far more time painting than gaming, I will probably never have the patience to become a really outstanding painter. So I always try to find a way to balance between the time I use and the result I get.

Hopefully I will get around to paint that Great Cthulhu model at some point, at least he will have a bit of company when he finally awakens.