The Epic journey continues. But I have been having a couple of unforseen problems along the way.

First off I really died in the process of painting Land Raider stribes for my Terminator Detachment, so after some time I went for the Tactical Company instead.

Next there was trouble about the pics. I usually take the photos with my wifes smartphone these days and send it to my email. But for some unknown reason this time it just took ages before I recieved them.

And finally, it turns out that I really have no idea about how to take proper photos of Epic minis. 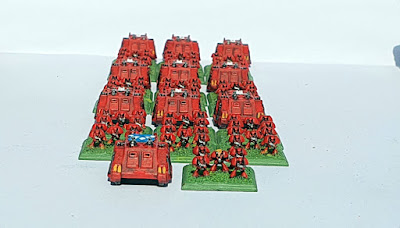 But hey, I guess the most important thing right now is to get the ball rolling, so I will post this and see where it takes me. Maybe the Dr. The Viking can help me take some better Epic pics one day.

Also I can really see now that I need to tidy up a bit on the legs and such stuff. I also want to add banners at some point. But for now I will say these are deffinately good enough for gaming in style. 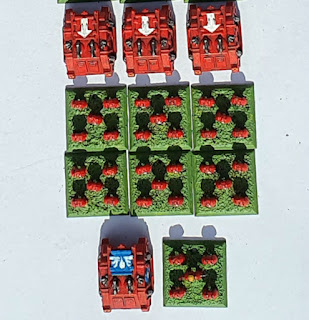 Top down view of the markings.

I don't want to plan what to come next this time. We will just have to see how it unfolds. I did get quite far with the Terminators though, so eventually they will join the forces.