I have had a couple of Jokaero lying around unpainted for some time and finally thought I should finish them. I already had a small Jokaero/Orangutan gang, so the two new guys had a nice bunch to join already.

I tried using a little different pallette then what I used on the already painted guys. 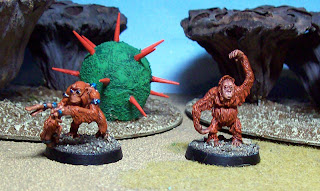 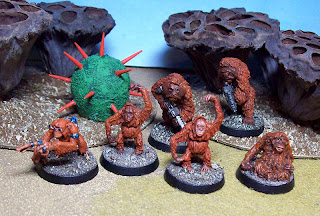 The two guys in the back sporting huge guns are from Sgt Major Miniatures.
The big guy sitting down on the right is from Black Cat Bases.

I was told by the Sgt Major Guys that they would probably do some more armed Orangutan during 2013, but it was not on top of their to do list, so anyone interested in seing more Orangutans with guns should write them and tell them we need more!