For some time I haven't painted all that much, I have had a lot of things to do, which is not gaming related and when I have had the time to paint I have mostly been working on a few terrain pieces or I have been painting stuff which has yet to be finished.

But I have been able to (almost) finish a few terrain pieces. These pieces have been really fun to work on and I think they ended up looking rather nice.

I will present them a bit backwards since I have previously shown WIP photos of the pieces I finished last. 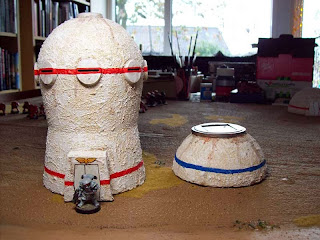 A Rogue Trader Inquisitor in front of an Imperial Outpost. 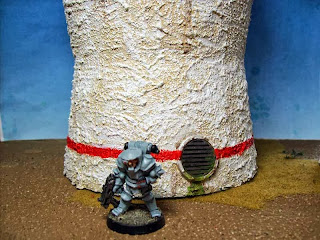 Detail on the backside of the tower.

There is still a bit more work to be done on these two pieces. I would like to add some numbers to the door of the tower and my old bunkers and such, but for now I save that for later.

To round off these two I have a few WIP photos, which might or might not interest some.

The tower upside down (it used to be a wooden vase). 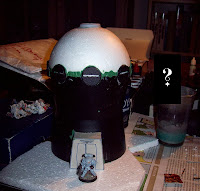 One of my Gyrinx' helping me out. 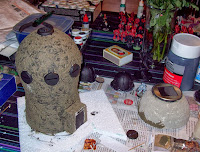 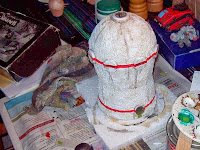 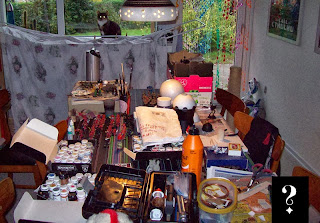 Some of the usual chaos in our living room... Ehm my work area.

Sorry about the questionmarks in some of the pictures, but that is because I was working on a secret project at the same time. Since then the secret has been revealed and it turned out to be a statue which is designated for a fictitious city called Røvede, which we use a setting in our gaming group. It will probably go well with modern gaming, pulp and would be fine for sci-fi and much other too. 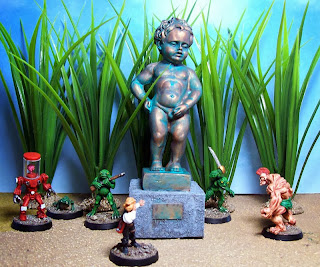 I didn't take many WIP pictures of this piece. Actually I only took pictures while working on the plinth after the statue was painted, so unless anyone really want to see those pictures I will just forget about those for now.

As most of you probably can guess, the statue is some souvenir I picked up in Belgium. I do think it is a bit silly, but that will fit fine with my gaming group, since most of the people I game with is rather silly too.

The miniatures in the picture is a mix of old GW, Black Cat Bases, RAFM and Reaper Miniatures.

And to finish up this update I have a picture of some of the upcoming terrain I am working on: 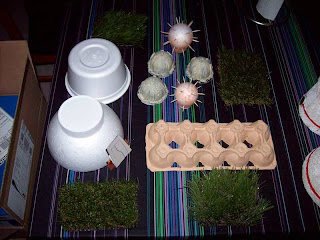