Last weekend I was attending this years Horisont (The 5th so far). The only open Danish convention dedicated to alternative miniature games. The previous four years I have been exhibiting different games, but this year I only came as attendant.

In Denmark there is not really a big following of alternative games and almost anything not related to Warhammer Fantasy/Warhammer 40.000 and Games Workshop can be considered alternative and niche. That is of course not 100% true, but even games like Warmachine and Hordes seems to be struggeling at times.

On top of this it seems like the people who actually do play alternative games tend to stay in their own gaming groups and are satisfied by that. I guess there is nothing wrong with that, but it makes it hard for the Warhammer people to find out that there actually is any alternatives.

Well enough of that and back to Horisont. This year saw a couple of changes from previous years, new people had taken over the practical stuff and the convention had moved to a different town. Fewer people attended (about 50), but it seemed like the usual suspects had made their way and the mood was great all the weekend, and as far as I am concerned, I don't think the convention suffered for the new location or the fewer attendants.

I only managed to take a few photos and play a few games, but for me lot of the charm of these conventions is also socializing with likeminded gamers, getting a few beers and ranting all night about how everything was better in the Rogue Trader days and such.

One of the games I managed to take a few photos of was Infinity: 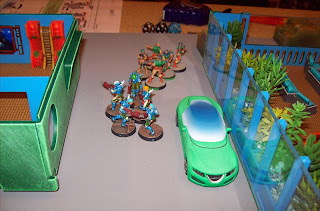 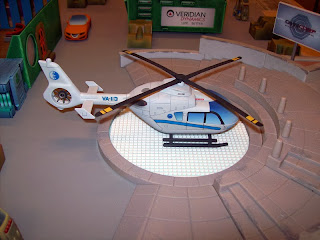 I didn't manage to play the Infinity game, but it sure looked really good! I have tried out Infinity once before and it seems like a pretty good tactical skirmish game. I hope I will get a chance to try it out again at some point, but right now I don't think I will end up buying into it just yet. I already have too many projects and considering the price of those models I just think I will end up playing too little or probably just having the miniatures lying around in the closet for years. But who knows?

Another great looking game was this Lego 40K mod: 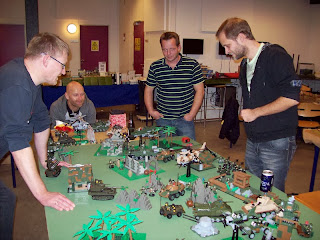 The table is bristling with Lego! 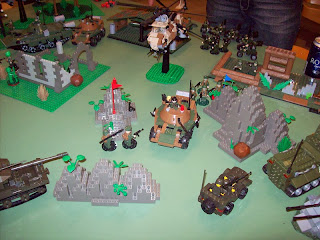 This game seemed kind of borderline, since 40K can't really be considered alternative and all the Lego models come prepainted. But it is gaming with Lego and that is not really something you see every day. The game looked great and I think it worked out pretty good too, even though it seemed like there might have been a bit too many models. But then again, with such a great collection I think it was too hard to leave anything out. So hopefully we will see more of this in the future.

And on to a game I actually managed to play on the second day of the convention: 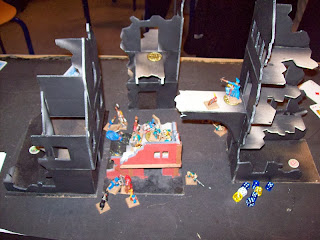 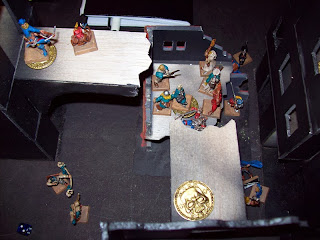 
I think this game is supposed to be an alternative to Mordheim, but I am only guessing since I never played Mordheim or read the rules. But, again guessing, I think the setting might be more compareable to Mordheim than the actual rules.

In Dread Streets each player control a small warband of 10 models. You have one leading hero, four main heroes and each hero has a helping henchman. Along the way the henchmen are giving bonus' to their heroes, as long as they stay standing up and eventually they can also be sacrificed to save a heroes life. So you actually control five heroes and the henchmen are more like visual aid for your bonus', wound counters or such, but it works out really good.


I can't really put a finger on the system, it seems like it has been playtested well and worked out in all the situations we encountered. I guess it might be possible for power gamers to destroy the game, but for people like those at Horisont it was perfect.

What we were shown was a trimmed down version of the actual rules. But as I understood, the further stuff was more objectives, missions and a campaign system (with the latter still in the works).

If you want to know more about Dread Streets I encourage you to visit betatester.dk and take a look around. (The blog is in Danish though, but it should be possible to get an idea of the project with the help of Google Translate or by contacting the people behind the game).

A few more games I didn't get to play this time: 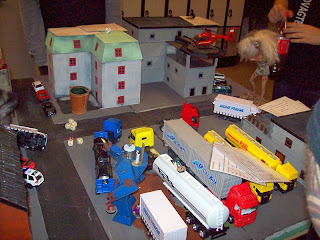 A city destroyed by Super System.

I tried out Super System this summer and it seems to be a really great system for over the top super hero gaming. I have a few super heroes, villains and henchmen in my painting queue, so I guess I will be trying out this system again in the not too distant future. 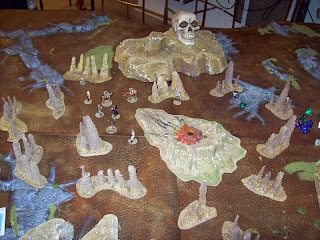 Pulp Alley just seem to be an awesome system for convention games. I think it is perfect for games which have an ongoing story to tell and a bit more adventure than just hard on battle. This game was presented by Thorbjørn of Dr. The Viking's Miniature Games Hell, I guess he is the best known or infamous Danish celebrity of alternative gaming.

Of course a lot of other great games took place over the weekend, but I didn't manage to get more photos taken this time.

Besides Dread Streets I tried out Zombicide, which seems to be the big thing right now, and it turned out to be a pretty good game. The models are not the most interesting, but the system seem to work and even though I never tried it before the rules came very easy. I think we were seven players, but still it was really fast and there was not much waiting time or anything.

I also tried out a couple of small card based games called Coup and The Resistance. Both was really fun and fast and made for good entertainment late at night with some beer.

The food was good, the people were all friendly, some German friends made their way too. So over all it was a really good convention and I am already planning what games to bring next year.
Posted by Jonas kl. 05:42