So this blog has been running almost a year now and hobbywise it has been a pretty good year. I managed to paint almost 150 miniatures and I maganed to buy "only" a  wee bit above 350 miniatures. I did not play many games with any of them, but that is ok.

I have taken a bit of a different approach to painting this year. Instead of trying to paint complete armies or projects to showcase I have chosen to paint whatever I felt like and I think it paid off. I have painted a lot and it ended up being a big bunch of strange and wonderful models.

All the miniatures I painted this year! Except a few I painted for a friend. 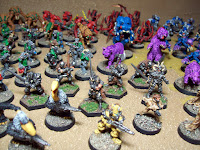 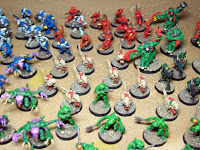 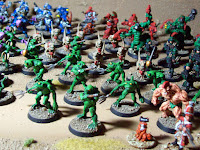 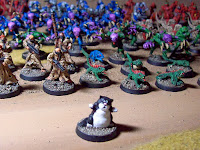 Most of these models have been featured on my blog during the year. I think the only ones which hasn't appeared previously is the Fantasy Warriors, which I painted before I started the blog, and the Pirates, which I might post next year, when I have painted a few more.

I don't really know where to go from here, but I will probably continue painting a lot of random stuff during 2014. I have made a long list of projects I would like to finish or continue with, I would especially like to finish some miniatures for stuff like Space Hulk, Blood Bowl or other miniture board games. There should be a good chance of completing such a project and get a few games played. 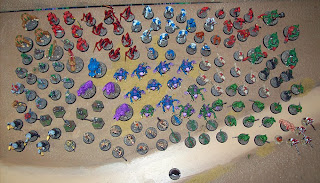 All in all I am pretty satisfied with my hobby year. I have painted a lot, I have collected a lot of out of print and rare models, I have tracked down a lot of obscure and unknown stuff from long gone miniature companies and I have actually managed to play a few games now and then too.

But like most years I do hope to play a bit more in the next, but I have come to realize for myself that what is most important for me right now is the collecting, trading and painting part of the hobby and if I play some games that is also great (of course), but if I never get to play a game again I can still enjoy the hobby as a collector and painter.