So it was time to paint me some Zoats... What can I say about the Zoats? I guess they are kind of a strange race, but I guess most of the Rogue Trader stuff is kind of strange, so they fit in fine with the setting. I have been wanting some Zoats for some time and this year I decided to do something about it and so I managed to get 5 Zoats fairly cheap from Ebay.

In the Rogue Trader days the Zoats were a Tyranid slave race created for war. Apparently they usually would roam around in groups of 4 sporting weapons like bolters and heavy bolters. But since they were allowed same equipment and weapons as Tyranids, they could also wear power armour, use gravitons, conversion beamers or whatever stuff you can think of from the Rogue Trader days. 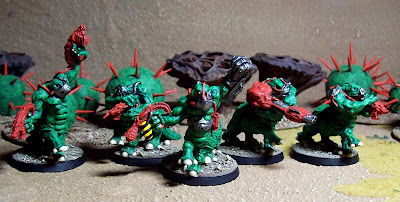 When GW made some Zoat models I guess Tyranids were already becoming something else and so the models were equipped with more bio engineered weapons, but the fleshborers still kind of looked like bolters, the missile launcher looked pretty funky and the leader was equipped with power glove and a flamer which looked like a mix of the fleshborers and an imperial flamer.

My combined Tyranid forces so far!

So when I painted my Zoats I decided to give them a look of semi bio enginered and tech equipment. It will not really work perfect with the never Tyranid background, but I think it will work fine with Rogue Trader weirdness and still be fine with my Hunter-Slayers. So the weapons was painted red, to look semi organic and tie the Zoats in with my Hunter-Slayers and I still decided to paint some metal parts on the flamer, missile launcher, power glove and armour. I also decided to do the hazard stripes on the flamer, it might be kind of silly, but I think it ended up looking good and when the organic weapons already looked a bit like bolters and flamers then why wouldn't they also mimic the hazard stripes? 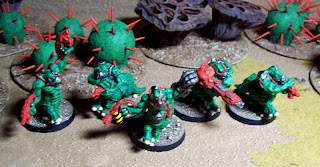 Ready to go to war. 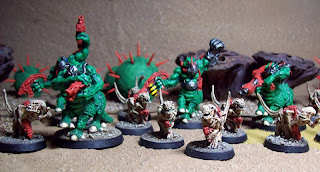 I am not planning to do a complete Tyranid force for later 40K gaming, but I have acquired 8 more Hunter-Slayers which I will paint and I have a bunch of the old plastic Tyranid Warriors, which I will probably paint at some point, so I guess that some day I might have enough Tyranids for more than just small skirmish games.

I don't really count the Genestealers as part of the Tyranid army, but if needed I have 24 painted Genestealers and a Patriarch, so they could reinforce an army too. So that almost concludes my Tyranid adentures...

I just got one more thing to hunt down! I would REALLY like to have the Proto Tyranid to lead my forces, but so far I have not managed to get one. 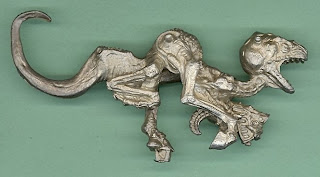